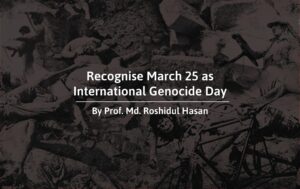 On March 25, the Pakistani army showed their barbarity and killed unarmed sleeping Bangladeshis indiscriminately. The students, teachers, common people, day labourers, and even rickshaw pullers were not spared from their oppression. This heinous slaughter included attacks on Dhaka University, medical college dormitory, police headquarters, and even the slum areas around the university campus. The main goal of this attack was to use genocide and terror to enslave the next generation of Bangladeshis for the rest of their lives.

According to the Australian “Sydney Morning Herald”, nearly one hundred thousand people were killed in Bangladesh on March 25, making it one of the most gruesome genocide events in history. However, we earned our independence from Pakistan in exchange of precious lives of 3 million martyrs and supreme sacrifice of two hundred thousand women.

There has never been a time in the world history when so many innocent people have been killed and so large a number of women raped without a declaration of war. Brutal Pakistani forces destroyed the offices of the Daily Ittefaq, Daily Sangbad, Weekly Ganobangla, and Daily People on that fateful night. Following the heinous “Operation Searchlight” massacre, the Pakistani army killed more than 300 students and 20 intellectuals and eminent teachers of Dhaka University. Professor Fazlur Rahman Khan, Professor Dr. A.N.M. Manirujjaman, Professor MA Muktadir, Dr Gobindra Chandra Dev, Professors A R Khan Khadim and Professor Jyotirmoy Guhathakurta were killed on the same night.After 12 o’clock the army entered Jagannath Hall and initially attacked the hall with mortars and began non-stop firing. Pak army entered through north and south gate and indiscriminately targeted students in each room and started killing students. Some students of Jagannath Hall were resident of Ramna Kali Bari. So, around 5–6 were killed there. Among them only the name of Ramonimohon Bhattacharjee is known. Many guests of students who were at those dorms were also killed, including Helal of Bhairab College, Babul Paul of Bajitpur College, Baddruddojha of Jagannath Hall, JibonSarkar, Mostaq, Bacchu and Amar of Netrokona. Archer Blood, the then-consul general of US at Dhaka, wrote in his book The Cruel Birth of Bangladesh, “Fire was started at Rokeya Hall and when the students tried to escape, the military started firing. From the conversation of military control room and army, a total of 300 students death was estimated.

The unprecedented incident of that gruesome murder is condemned by people around the world. Such genocide is considered as an international crime under any circumstances by all international laws. That is why, all Bangladeshi are demanding recognition of March 25 to be designated as International Genocide Day.