Ups and downs of Bangladesh in last 50 years 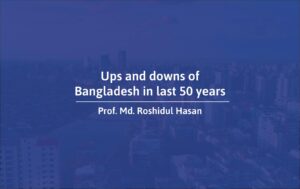 Not to mention that we have a lot of pains that needs to be addressed in this golden jubilee of independence. On the eve of the sunrise of independent Bangladesh, we have lost the Father of the Nation Bangabandhu, Bangamata and their family members. We have been deprived of justice for that brutal murder for long due to the black law called “Indemnity Ordinance” passed by General Ziaur Rahman within the last 49 years of independent Bangladesh.

The four principles of the war of liberation; Democracy, Secularism, Socialism and Nationalism, were struck in each of them that also happened in the last 49 years. At first democratic rights were taken away. Then a system of exploitation and torture was established in the social system and the BNP-Jamaat government established the communalism and inequality in the society.

Religion was used for personal and political interests by denigrating secularism. Those who talked about religion, talked about nationalism – their way of life may be completely different in the individual sphere. They are the ones who raised their children in a foreign ideology through English. And for the majority of marginalized people, the only thing left is madrasa, semi-technical or normal general education.

The state moved away from the people-oriented idea of education which had grown in the spirit of the war of liberation. The foundations of inequality in a divided education system continued to grow in silence. The consciousness of nationalism, one of the basic principles of the state, was gradually being misled. That is what we have seen in the last 49 years of independent Bangladesh.We have also seen the flag of independence in the car of that anti-independence clique. It was the humiliation and pain as well as shame for us. We all know during the BNP-Jamaat coalition government, Bangladesh has repeatedly become a champion in corruption.

The Pak Army and the anti-independence clique of this country left Bangladesh in ruins. When Father of the Nation Bangabandhu Sheikh Mujibur Rahman, the greatest Bengali of all time, brought this country out of the rubble, and trying to build a golden Bengal and bring Bangladesh into the trend of development, he had to die. The changes that began to make a lasting impression on the society after the assassination of Bangabandhu are the practice of immorality with the help of the state. Muscle and injustice were justified by the state. The character of politics and economy began to change. The arrogance of tarnishing the tradition and purity of politics came openly.

We are very fortunate that the pro-liberation forces have got back the four principles of the state through vision and hard work of Bangabandhu’s daughter Honorable PM Sheikh Hasina. Bangladesh is being led in the right direction today in the world court.

In the inevitable repercussions of history, that country, Pakistan, is behind Bangladesh in all indicators of development today. Bangladesh is moving forward at a great pace. We have got an independent and sovereign country under the leadership of Bangabandhu, the great hero of independence in 1971. And under the lively leadership of his worthy daughter, Honorable Prime Minister Sheikh Hasina, we are going to build a prosperous and developing Bangladesh. On the eve of the golden jubilee of independence, Bangladesh has today enjoyed the status of a developing country from a least developed country.

Today, Bangladesh has advanced in every socio-economic index including economic growth, health, education, women’s empowerment, per capita income growth. We have already been able to transition from the Least Developed Countries (LDCs) of Bangladesh to the developing countries to a middle-income country. The United Nations Committee on Economic and Social Development Policy (CDP) on March 15 officially announced Bangladesh’s eligibility for transition from the LDCs. In order to pass the LDC category, per capita income, human resource index and economic fragility index are the conditions for achieving any two of these three indicators, but Bangladesh has risen to the criteria of the three indicators.

Today’s transition from a war-torn country, Bangladesh achieved in implementing the government’s vision 2021. This has been made possible by the courageous and progressive development strategy of Bangladesh under the visionary leadership of HE Sheikh Hasina which has brought Bangladesh on the path of rapid development through overall economic growth, structural transformation and significant social progress.

Bangladesh is moving forward with the goal of becoming a developed and prosperous country by 2041. In less than 50 years of its existence, Bangladesh is going to show success like the launch of high speed Bangabandhu Satellite-1. It comes up how the father of the nation united the whole nation for independence, how the dream of the father of the nation from a war-torn country is going to turn into the golden Bengal.

I would like draw here some statistics as well;

• Bangladesh is the third largest rice producer in the world.

Bangladesh has also improved a lot in terms of poverty rate.

The country’s education sector has achieved great success. When the education system of the whole world is coming to a standstill due to Pandemic,but the touch of digital technology is now in Digital Bangladesh. As a result of which online classes are running in the country, students are able to take online classes without any hindrance.

At present, Bangladesh’s exports have increased 70 times to 31.2 billion dollars. At the same time, the number of export products has also increased. Bangladesh has emerged as the second largest exporter of readymade garments in the world. More than 4 million workers are engaged in this sector.

The Government of Bangladesh has taken all the groundbreaking steps to make the dream of Digital Bangladesh a reality. Union Digital Centers have been set up in 4550 Union Parishads of the country with the aim of providing government services through the use of technology at the grassroots level. Bangladesh has created one of the largest national web portals in the world. The number of these portals from the central level to the union level is about 25000. All the upazilas of the country have been brought under the Internet. Due to various steps taken in the field of telecommunication, the number of mobile subscribers in Bangladesh has increased to 12 crore 36 lakh and the number of internet subscribers has increased to 4 crore 48 lakh. E-payment and mobile banking have been introduced to make the service delivery process easier and more transparent.

Among the notable achievements of Bangladesh in the power sector is the addition of additional 6,323 MW power to the national grid, which has increased the number of beneficiaries of electricity from 48 per cent to 62 percent. At the same time, the per capita power generation has increased from 220 kWh to 348 kWh hours. New power connections have been provided to 35 lakh customers. Total of 75 new power plants have been constructed.

On the eve of the golden jubilee of independence, the nation’s expectation will be to retain these national achievements, prevent the misuse of state resources and ensure the basic needs of the people, including the expansion of science and technology. Remember, the economic condition and technological development of a country ensures the overall development of a country. If we really want to keep this pace of development, we must ensure the continue this Government for long run.