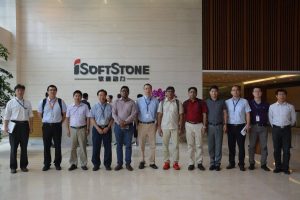 The E-Village initiative has been started aiming at Empowering Rural Communities with ICT for Ensuring Sustainable Agricultural Development in Bangladesh. The project is implemented by Bangabandhu Sheikh Mujibur Rahman Agricultural University and iSoftStone and supported by CRI. The project is at its pilot stage, it is developing rapidly and giving positive feedbacks as we saw that from the farmers of Pajulia village in Gazipur Sadar upazilla.  The E-village project has developed a sensor device that can offer several supports at a time related to agricultural decision support that will help farmers instantly whenever they need.

Following the development in during the pilot phase, the E-village technical team members, Professor Md. Roshidul Hasan and Professor Dr. Md. Morshedur Rahman from Bangabandhu Sheikh Mujibur Rahman Agricultural University and Mr. Tonmoy Ahmed from CRI have flown to head office of iSoftStone in China on 11th June 2017. There they have had several presentations workshops and policy discussion with top management of iSoftStone for the upcoming initiatives. Moreover, the E-Village team members from Bangladesh have had several field and laboratory visit to enhance and expand the work strength and capacity of E-village in the future days.

The team has safely returned to Bangladesh on 17th June 2017 after having a weeklong fruitful meeting and workshop. The whole e-village team is aimed to have experience sharing meeting and policy discussion for the later stages of the works for E-Village very soon as the initiative is aimed to be expanded at 17 districted of Bangladesh from different Agro-Ecological Zones of Bangladesh.

The empowerment of the farmers with the real time appropriate decision support in the aim of the E-Village initiative which have been successfully implemented in the pilot phase. Now it is time to distributed the benefit of it among the farmers of Bangladesh.