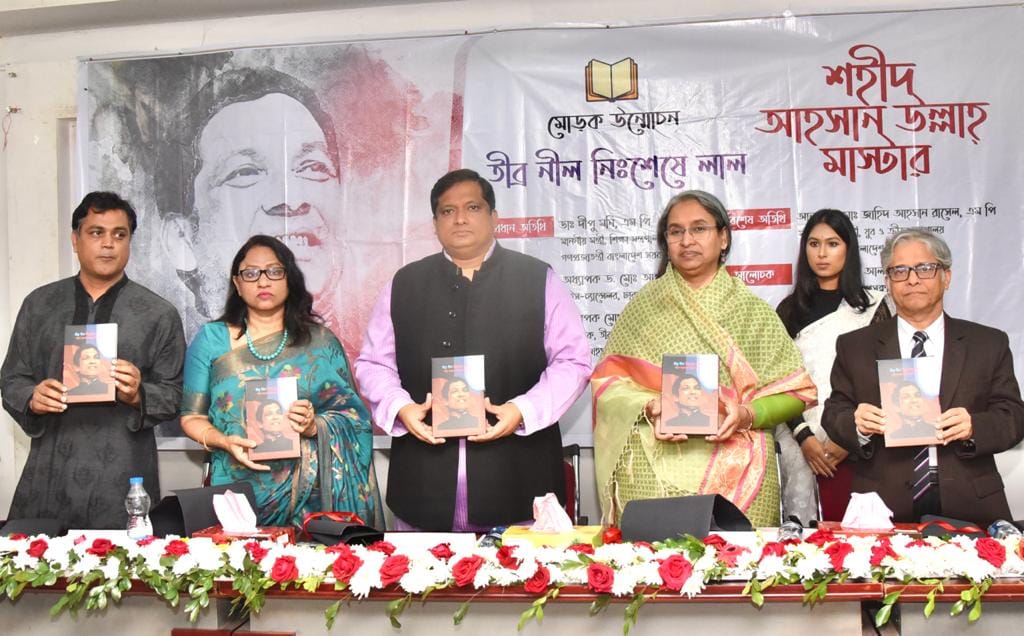 The book ‘Teebra Neel Nisshese Lal- Shaheed Ahsanullah Master’ has been published, depicting how much a person can do even in a short span of life. Unwrapping Ceremony of the book was held today at National Press Club. Education Minister Dipu Moni was the chief guest at the ceremony. Describing Shaheed Ahsanullah Master as a symbol of honesty, integrity and courage, Education Minister said he (Ahsanullah) had worked throughout his life for establishing the rights of the people and establishing the ideals of Bangabandhu. She also said,“Ahsan Ullah has worked throughout his life for establishing rights of the people, inspired by the ideals of Bangabandhu. When he started a work, he did it with honestly and integrity. In the process, he earned the love and respect of the people.” “He rescued the parliamentary seat of Gazipur for Awami League after 20 years. The reason behind this was his love for humanity, honesty and patriotism. He worked to protect the rights of the workers of the tea gardens”, she added.

State Minister for Youth and Sports Zahid Ahsan Russell, son of Shaheed Ahsan Ullah Master was the special guest. He said,“My father worked for the people. After taking part in the War of Liberation, he left many lucrative jobs and devoted himself to teaching profession. He served as an honorary teacher until his death.” In his speech, Dhaka University Vice-Chancellor Prof Dr Md Akhtaruzzaman said, “Ahsan Ullah Master was a popular teacher and a leader. He has risen from the grassroots to the national level.”